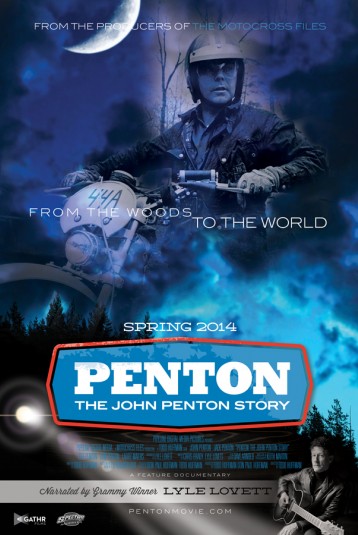 A new film about an American icon and motorcycle pioneer who took on the established motorcycle industry changing it…forever.

PENTON: The John Penton Story is an American story about family, competition, ingenuity and business that will tug at hearts of everyone who sees it. John Penton is motorcycle icon and pioneer who’s life on a farm in Ohio led to a long list of motorcycling accomplishments and global notoriety. What began with a humble motorcycle shop, turned into international off-road racing career leading him to the discovery of the need for a smaller machine which he was soon selling in the US. With his innovative Penton motorcycles he introduced riding to a new generation of riders around the world.

His early love of riding motorcycles pointed him to become a champion at the infamous Jack Pine Enduro in Michigan after World War II. Then, learning from his early days as a “Mud Runner” in those mid-west, off-road motorcycle races, John Penton knew there was a better, lighter machine for competition out there…He just hadn’t invented it yet. That would come years later but he would first have to endure harder lessons in life like losing his young wife Katherine to a debilitating disease at a young age leaving his three boys motherless. This spiraled him into a frenzy of competitive endeavors including setting the transcontinental record on a BMW motorcycle in 1959.

He would re-marry in 1960, doubling the size of his family and begin another chapter of international racing in 1962 that would eventually bring him to the source of his dream of making his own motorcycle in 1967. The first Penton motorcycles developed by John and built by a small bicycle and moped factory in Mattighofen Austria named KTM arrived in 1968. For the next ten years the Penton motorcycles along with John’s family and loyal followers battled the competition, the motorcycle industry, a global economy and even more family tragedy to become a world-wide motorcycle racing dynasty.

Since John’s first visit to Austria and KTM in 1967 and those first 10 Pentons delivered to Amherst, Ohio in 1968, KTM Sportmotorcycle AG has become the largest producer of off-road motorcycles in the world.
This film features the largest cast of motorcycle legends ever assembled with over 100 interviews. Plus, historically accurate re-creations are all blended with archival photos and film to match the wonderful voice-over of a Penton rider in his younger days…Grammy Winner, Lyle Lovett.